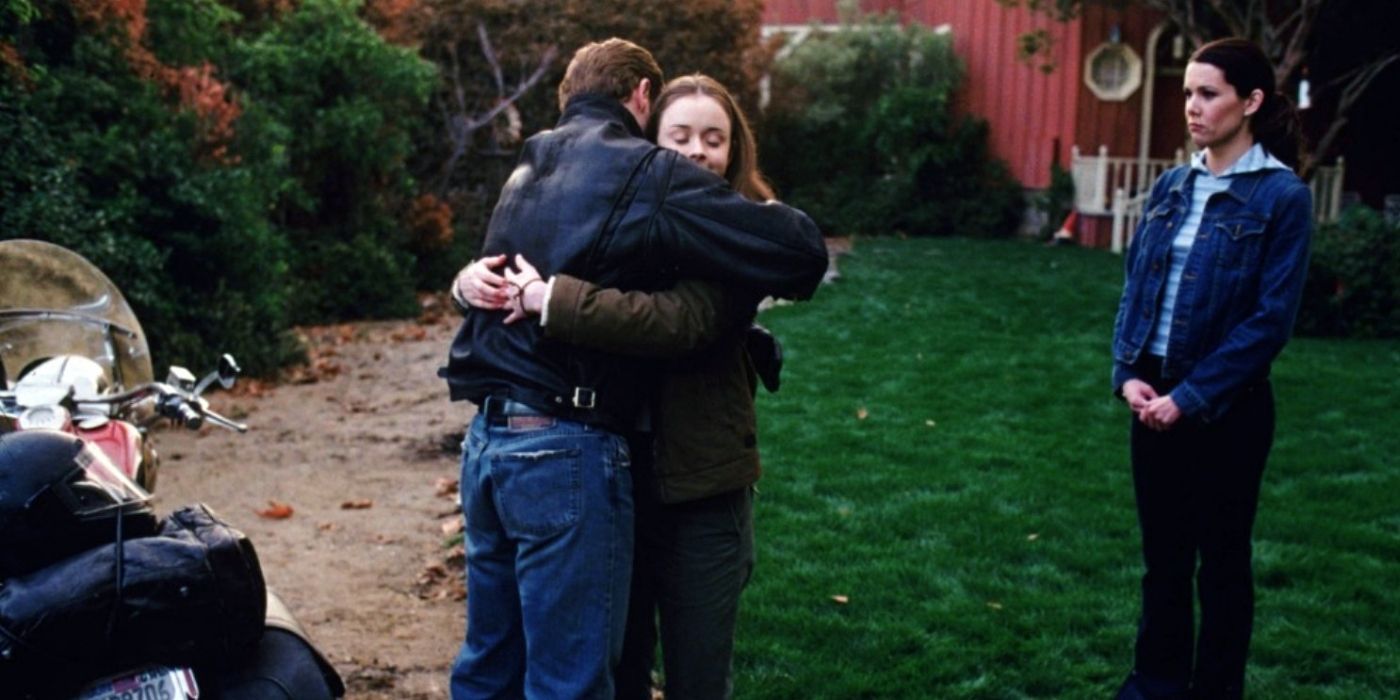 From the pilot of Gilmore Girls, it’s clear that Lorelai has done an amazing job raising Rory on her own, making life full of lessons but still a lot of fun. When Rory’s dad Christopher Hayden visits Stars Hollow in season 1, viewers begin to learn about their complicated connection. Chris loves his daughter and is proud of how intelligent and ambitious she is, but he can’t seem to get this parenting thing right no matter how hard he tries.

When examining how well Rory gets along with her dad in each season of Gilmore Girls, their love for each other and hope that their relationship will improve becomes evident, although in the Netflix revival A Year In The Life, it feels like they have become almost like strangers to one another.

8 Season 1: Rory Is Hopeful About Her Father/Daughter Relationship

Many Gilmore Girls fans believe Christopher gets worse, but when he appears in season 1, he seems sweet, charming, and interested in having a close connection to Rory. In the episode “Christopher Returns,” he bonds with his daughter, has fun getting to know Stars Hollow, and before he leaves town, even tells Lorelai that they should get married.

This is a good season for Rory and Christopher as Rory is hopeful and optimistic that they can stay close this time. Fans learn that Chris hasn’t always been in Rory’s life and that he’s not the most mature or reliable parent. It’s heartbreaking seeing how much Rory wants her dad to be around and fans can tell that it won’t be this ismple.

7 Season 2: Rory And Christopher Get Closer

Season 2 is a turning point for Rory and Christopher as he seems to be making a real effort. In “Presenting Lorelai Gilmore,” he is there by Rory’s side when she is part of a debuntate ball, and in “It Should’ve Been Lorelai,” Christopher’s new partner Sherry Tinsdale wants to get to know Rory.

Although Rory and her dad get closer in season 2, Lorelai is always worried that he will disappear again, and viewers feel super uneasy about this relationship the entire time. It never feels like Rory and Chris are on solid ground and while he means well, he’s never the stable presence that Rory needs.

6 Season 3: Rory Gets Used To Christopher Becoming A Dad Again

While the Christopher/Lorelai/Luke love triangle is a dramatic and constant presence on Gilmore Girls, it feels like Chris and Sherry might make it by the time Rory and Lorelai go to her baby shower in “Take the Deviled Eggs…”

As Christopher prepares for this massive life change, Rory gets used to her dad having another child, and it feels like for once, the father and daughter are on better, happier footing. Viewers can see Rory having a big role in this baby’s life and it seems like things could work out happily ever after.

5 Season 4: Rory And Christopher Feel More Estranged Than Ever

Rory and Christopher’s relationship hits another turning point in season 4 of the popular series.

While Rory’s whole life changes when she leaves home for Yale and gets used to difficult classes, being around her peers all the time, and living with Paris Geller, Christopher doesn’t appear much in these episodes. It doesn’t feel like Rory’s dad is interested in her collegiate life and it’s a heartbreaking realization. While it’s possible that Christopher is overwhelmed with new parenthood, it’s also strange and confusing that he isn’t really around for Rory here.

4 Season 5: Rory Worries About Her Parents

Season 5 is a tough one for Christopher as Sherry abandons him and their daughter Gigi. Rory has to be the parent here once again as she maturely and wisely asks Christopher to please leave Lorelai alone so she can finally be happy with Luke Danes.

This is a sad group of episodes for Rory and Christopher, as Rory feels guilty about asking her dad this question, and when Christopher’s own father passes away, she realizes that he needs Lorelai more than ever. Christopher can be clingy on Gilmore Girls but this is a time when his emotional and sensitive state makes sense.

When Christopher begins paying for Yale in season 6, it’s bittersweet. He can’t really buy Rory’s affection, and it won’t fix all the time they didn’t spend together, but it does feel like the right thing to do. This season also stands out because Logan and Christopher properly meet in the episode “You’ve Been Gilmored” and Chris tries to be the tough parent, saying he wants to make sure Rory is living in a nice place.

By this point in the series, it’s clear that Rory and Christopher will never be super close and that they likely won’t be able to repair the relationship that they never got a chance to have. But it does feel like there is more hope than ever before, with Chris spending more time with Rory and at Yale.

Season 7 sees Rory’s parents committing to each other, but there are reasons why Christopher and Lorelai get divorced. Rory is upset that her parents got married without wanting her to be there, which is fair, but she does her best to show them support.

Fans can tell that Rory has many complicated emotions about her mom and dad getting married. It must make her think about what could have been, as she had long ago given up on them reuniting. Rory is mature and intelligent here, wanting them to make the right decision and be happy.

1 A Year In The Life: Rory And Christopher Have A Tough Heart-To-Heart

Christopher and Rory finally have a discussion in A Year In The Life that fans will always remember. It’s been a long time coming but it’s impossible not to feel emotional while looking back on it, and it also feels like Rory has come to terms with not being close with her dad.

While writing the book based on her life and childhood, Rory visits Christopher at the office and asks him about Lorelai being a single mother. Christopher says, “I think it was exactly what was supposed to happen. And I think [Lorelai] would back me up on that.” It’s hard for Rory not to feel hurt and abandoned by her father’s words, as he sounds defeated and resigned to the fact that Lorelai would always have a bigger presence in Rory’s life. Based on this scene, it feels like Christopher never wanted to be too close to Rory, and it’s hard not to wonder what could have been.