Welcome back to This Week in Apps — the easiest way to keep up with everything that happened in the world of apps over the past week — from the breaking news to the trends and all the other information an industry watcher needs to know.

The app industry is as hot as ever, with 194 billion downloads in 2018 and more than $100 billion in consumer spending. People spend 90% of their mobile time in apps and more time using their mobile devices than watching TV. In other words, apps aren’t just a way to waste idle hours — they’re big business, and one that often seems to change overnight.

In this Extra Crunch series, we help you to keep up with the latest news from the world of apps.

This week, we’re looking at that one iOS 13 bug everyone is complaining about, App Store Q3 trends, plus the latest revenue numbers announced by Apple and Google during quarterly earnings. We’ve also found a new product for figuring out what may have caused spikes or changes in an app’s history, and we’re tracking new information about Microsoft’s Xbox Console to mobile streaming service as well as Google’s Motion Sense.

Everyone is complaining about iOS 13 killing background apps

As a result, developers are angry and users are frustrated. A number of iOS 13 users are complaining about iOS 13’s aggressiveness in killing background apps and tasks, which is attributed to poor RAM management. This particularly affects apps like Safari, YouTube, Overcast and others. Users have lost Safari tabs, emails they were composing, or the video they were watching just after switching away for a minute.

I’ve noticed this since the first 13.2 betas, and Overcast users keep reporting it as well: background apps seem to be getting killed MUCH more aggressively than before.

(Especially on the iPhone 11 if you use the camera, presumably because it needs so much RAM for processing.) https://t.co/Qscmsj1OGY

This has been a problem since the betas, but people were hoping they’d be addressed by the public releases. Apple hasn’t clarified what’s at fault here, but there’s speculation about the impact of the memory-intensive camera system.

As TechCrunch editor Matthew Panzarino put it, it “feels like I’m back on iOS 3.”

On this week’s episode of @atpfm, I compared it to a toddler under a blanket. “You can’t see me! I’m invisible!” But on iOS 13.2, it’s actually true. As soon as you’re not looking at an app, it disappears from RAM.

Developer Nick Heer of Pixel Envy says the bug isn’t catastrophic, but “it absolutely should be the highest of priorities to fix it. It’s embarrassing that all of the hard work put into making animations and app launching feel smooth is squandered by mismanaged multitasking,” he says.

Consumers spent more than $500M on photo/video apps in Q3

Outside of mobile games, entertainment and streaming apps are also pulling in the big money. But there’s another category benefiting from the shift to the subscription model: photo and video apps. In this category, you’ll find apps that promise to touch up photos, add filters that can make or break Instagram careers, as well as the video giants like YouTube and TikTok. 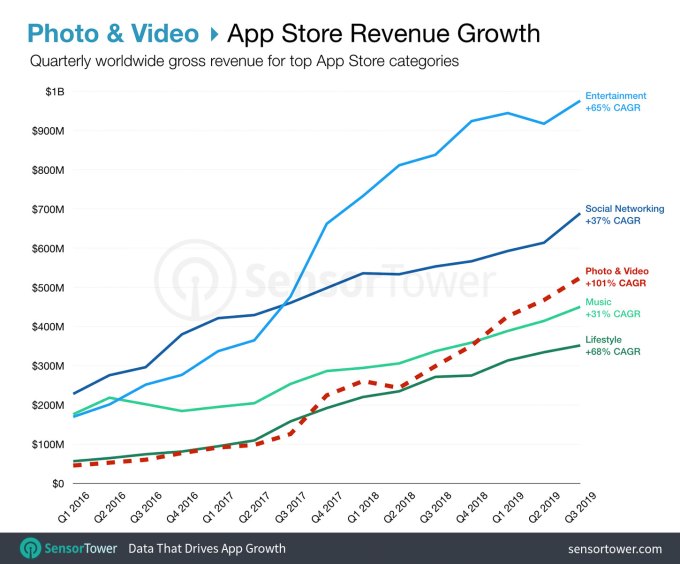 In Q3, the category grossed more than $500 million, up a whopping 75% year-over-year, says Sensor Tower. It’s also seeing an annual growth rate of 101% since 2016. Much of this is attributable to YouTube, which alone was responsible for 30% of the category’s revenue in Q3. (Just wait until TikTok takes in-app monetization seriously, though.) 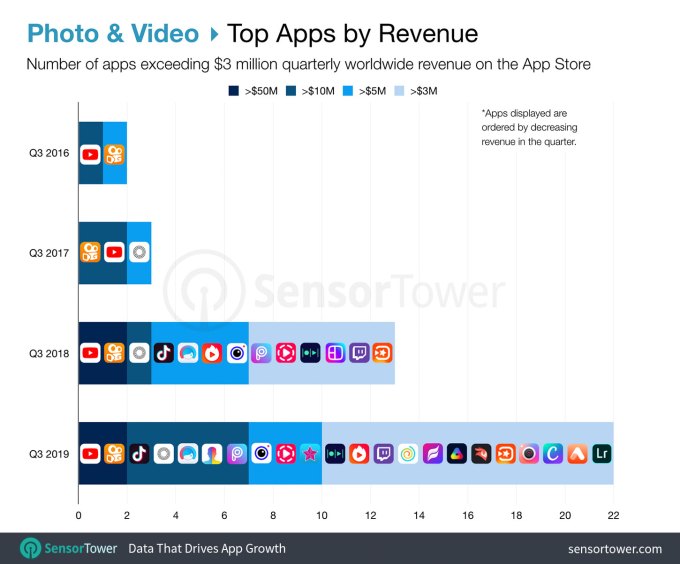 But now, it’s not just the top apps that are growing. In Q3, 22 apps exceeded $3 million in gross user spend, compared to just 2 in Q3 2016. And 7 apps had more than $10 million in revenue, including TikTok, VSCO, Facetune 2, FaceApp, and PicsArt.