Even as Facebook continues to take a hands-off approach to monitoring violent rhetoric and disinformation on its platform, the company will make a $10 million donation “to groups working on racial justice” in the U.S., according to a late Sunday night post from chief executive Mark Zuckerberg.

The commitment from Facebook follows a week of protests around the country challenging police brutality — spurred by the dissemination of a video on Facebook showing the death of George Floyd, an African American man who was killed by police officers in Minneapolis.

Zuckerberg’s pledge comes after several prominent Facebook employees expressed their frustration with their company’s response on Twitter and only a few hours before a number of the company’s workers staged a virtual walkout.

“I work at Facebook and I am not proud of how we’re showing up,” Jason Toff, a director of product management at Facebook, wrote on Twitter. “The majority of coworkers I’ve spoken to feel the same way. We are making our voices heard.”

I work at Facebook and I am not proud of how we’re showing up. The majority of coworkers I’ve spoken to feel the same way. We are making our voice heard.

Zuckerberg’s statement comes as several technology companies have issued their own messages of solidarity with the protests and the systemic injustices they are challenging.

In his Facebook message, Zuckerberg calls attention to the fact that the video capturing George Floyd’s murder was posted on his platform.

“… it’s clear Facebook also has more work to do to keep people safe and ensure our systems don’t amplify bias,” wrote Zuckerberg. “The organizations fighting for justice also need funding, so Facebook is committing an additional $10 million to groups working on racial justice. We’re working with our civil rights advisors and our employees to identify organizations locally and nationally that could most effectively use this right now.”

The commitment from Facebook is in addition to roughly $40 million that Zuckerberg has invested “annually for several years” in organizations working to combat racial injustice.

For critics like Anand Giridharadas, the commitments from Facebook’s coffers don’t outweigh the problems with the company’s business model and its inability to adequately address the ways in which the company’s service amplifies disinformation.

“And so the giving back that he’s doing isn’t just a negligible contribution that won’t really make much difference,” Giridharadas writes. “It actually helps to make things worse, by buying his toxic business model a little more breathing room and political capital.”

And so the giving back that he’s doing isn’t just a negligible contribution that won’t really make much difference. It actually helps to make things worse, by buying his toxic business model a little more breathing room and political capital.

Downloads of police scanner apps, tools for private communication and mobile safety apps hit record numbers this past weekend in the U.S., amid continued nationwide protests over the police killing of George Floyd, as well as the systemic problems of racial prejudice that plague the American justice system. According to new data from app store intelligence firm Apptopia, top U.S. police scanner apps were downloaded a combined 213,000 times this weekend, including Friday — a 125% increase from the weekend prior and a record number for this group of apps.

The Police Scanner app saw the most downloads of the group, with 19,000+ on Friday, nearly 24,000 on Saturday and 35,700+ on Sunday. However, the daily active user count for the Scanner Radio – Fire and Police Scanner app was higher throughout the weekend, with some 43,000+ to nearly 45,000 users launching the app on a daily basis during this time. That was followed by Police Scanner, whose daily user count ranged from 38,000 to more than 40,000, per Apptopia’s report.

Overall, however, the downloads were fairly spread out among the group of apps. That indicates people were likely coming across the apps through app store searches, rather than through increased word-of-mouth recommendations for one specific app or an ad of some kind. 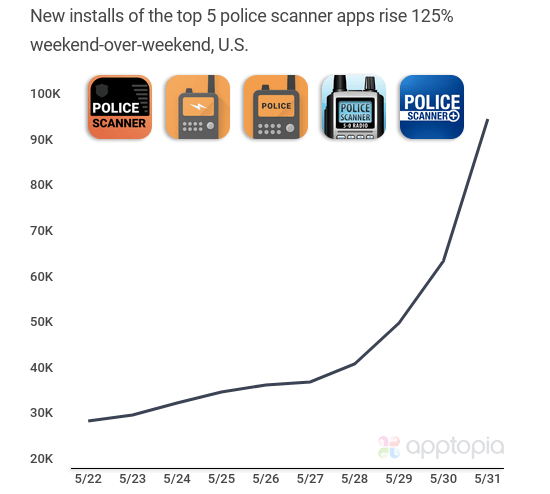 In addition to the record downloads for police scanners, two other apps also saw significant increases due to the protests: encrypted messaging app Signal and Citizen, the latter a community safety app for real-time alerts and live video.

Signal was downloaded nearly 37,000 times over the weekend and Citizen was installed over 48,000 times, the firm found. On Sunday, both apps broke new records for single-day downloads in the U.S., as well, with nearly 24,000 downloads for Citizen and 15,000 for Signal.

Police scanner and other communication apps were only some of the tools being used to keep track of protests over the weekend. Users have also communicated through social media posts across Facebook, Twitter and Snapchat, including by posting and sharing videos, photos and other live-streamed events. Some people believe these platforms give a better window into what’s happening on the ground in real time compared with news reports, which editorialize the content or present it with bias and miss some of the key stories that would otherwise not gain attention.