If you’re feeling flush this week, then perhaps instead of buying a second Bugatti you might consider picking up this lightly used Enigma Machine. These devices, the scourge of the Allies in World War II, are rarely for sale to begin with — and one in such good shape that was actually used in the war is practically unheard of.

The Enigma saga is a fascinating one, though far too long to repeat here — let it suffice to say that these machines created a code that was as close to unbreakable, allowing the Nazis to communicate securely and reliably even with the Allies listening in. But a team of mathematicians and other experts at Bletchley Park in Britain, the most famous of them Alan Turing, managed to crack the Enigma’s code, helping turn the tide of the war. (If you’re interested, a good biography of Turing will of course tell you more, and Simon Singh’s The Code Book tells the story well as part of the history of cryptography.) 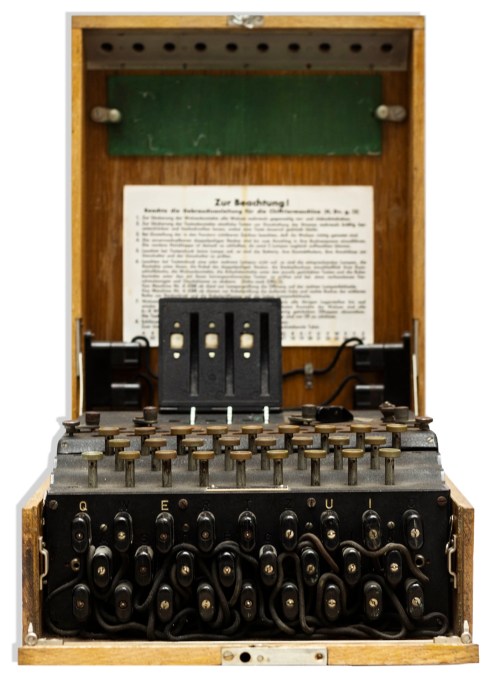 The risk of exposure should a machine be captured by the Allies meant that German troops were instructed to destroy their Enigma rather than let it be taken. And at the end of the war, Winston Churchill ordered that any surviving Enigmas be destroyed, but many escaped into the hands of private collectors like the person who got this one. It is thought that only a few hundred remain extant, though as with other such infamous artifacts a precise estimate is impossible.

This machine, however, passed through the fires of WWII and survived not only intact but with its original rotors — the interchangeable parts which would spin in a special fashion to irreversibly scramble text — and only one of its interior light bulbs out. The battery’s shot, but that’s to be expected after so long a duration in storage. If you’re waiting on an Enigma in better condition, expect to be waiting a long time.

Naturally this would be of inestimable value to a deep-pocketed collector of such things (let us hope in good taste) or a museum of war or cryptography. The secrets of the Enigma are long since revealed (even replicated in a pocket watch), but the original machines are marvels of ingenuity that may still yield discoveries and provoke wonder.

Bidding for this Enigma starts at $200,000 on Thursday at Nate D Sanders Auctions. That’s some ten times what another machine went for ten years ago, so you can see they’re not getting any less expensive (this one is in better condition, admittedly) — and it seems likely it will fetch far more than the minimum.