Shan Kadavil, who spent early days of his career managing tech support firm Support and then heading India operations of gaming firm Zynga, says he had a calling of sorts when his son was born. Kadavil realized that much of the meat that sells in India is not exactly healthy. The perishables are loaded with chemicals to superficially extend their life by six months, if not more. He wanted to do something better.

Fast forward four years, Kadavil said today that FreshToHome, his new e-commerce startup that delivers “100 percent” pure and fresh fish, chicken, and other kinds of meat, has raised $11 million in Series A funding. The startup has raised $13 million to date.

The round was led by CE Ventures, with participation from Das Capital, Kortschak Investments, TTCER Partners, Al-Nasser Holdings, M&S Partners and other Asia and Valley based Investors. Some of the backers of FreshToHome include Rajan Anandan, the former head of Google Southeast Asia, David Krane, CEO of GV, and Mark Pincus, chairman of Zynga.

In an interview with TechCrunch, Kadavil said the startup is trying to “Uber-ize farmers and fishmen in India. We are giving them an app — around which we have a US patent — for commodity exchange. What farmers and fishermen do is they bid with us (as mandated by local laws) electronically using the app.” By dealing directly with the source, the startup is eliminating as many as half a dozen middlemen to cut costs. 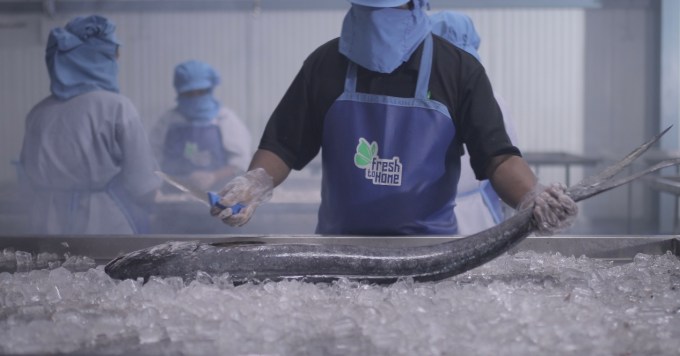 The startup has built its own supply chain network. “We have got a 1,000 people, 100 trucks, and 40 collection points.” The startup, which also uses trains and planes to move inventory, has become one of the biggest clients of airlines Indigo and SpiceJet, he added. Kadavil claimed that FreshToHome is also the largest e-commerce platform for meat with $1.73 million in GMV sales each month.

If this all sounds well strategized, it is because of the people who are running the show. Kadavil founded the FreshToHome with Mathew Joseph, a veteran in the industry who has dealt with fish export for more than 30 years. Joseph started India’s first e-commerce venture in fish and meat called SeaToHome in 2012.

FreshToHome has also emerged as a micro-VC to farmers where it is doing cooperative farming. In such model, FreshToHome guides farmers to use the latest technologies to produce certain kind of fish. As of today, the startup is seeing 60,000 kg (132,227 pound) of production in cooperative farming through its marketplace and over 400,000 kg (881,849 pound) of total products sold per month.

FreshToHome will use the fresh capital to expand its supply chain network, connect with as many as 8,500 new farmers, and start delivering vegetables. It already delivers vegetables in Bengaluru. Kadavil said the startup will also expand to two more cities — Mumbai and Pune.

FreshToHome will compete with a handful of startups, including Licious, which has raised more than $35 million to date, ZappFresh, and BigBasket, which just earlier this month raised $150 million. The cold-chain market of India is estimated to grow to $37 billion in next five years.

In a prepared statement, Tushar Singhvi, Director of CE Ventures said, “The Meat and Seafood segment in India is pegged to be a 50 billion dollar market, but we have to keep in mind that it’s a highly fragmented industry. FreshToHome.com is not only trying to streamline the industry, they’re also using technology to revolutionize the way the industry functions by disintermediating the supply chain, eliminating the middleman and working directly with the fishermen and farmers in a market place model, to make fresh and chemical free food accessible to the masses at large.”