Nintendo has a long history when it comes to exercise-driven games. I’m dating myself, but I can say I remember playing Track & Field on NES with the Power Pad. How far we’ve come! Ring Fit Adventure is a full-body workout for grown-ups, but fun, gentle, and ridiculous enough to forget it’s exercise.

The game and accessories were announced in September, coming as a complete surprise even considering Nintendo’s constant but hit-and-miss attempts at keeping its players healthy. What really threw people off was that this game actually looked like… a game. And so it is!

Ring Fit Adventure has you, the unnamed and (naturally) mute protagonist, journeying through a series of worlds and levels chasing after Dragaux, a swole dragon who’s infecting the land with… something. Maybe he’s not wiping down the equipment afterwards. Come on, man. 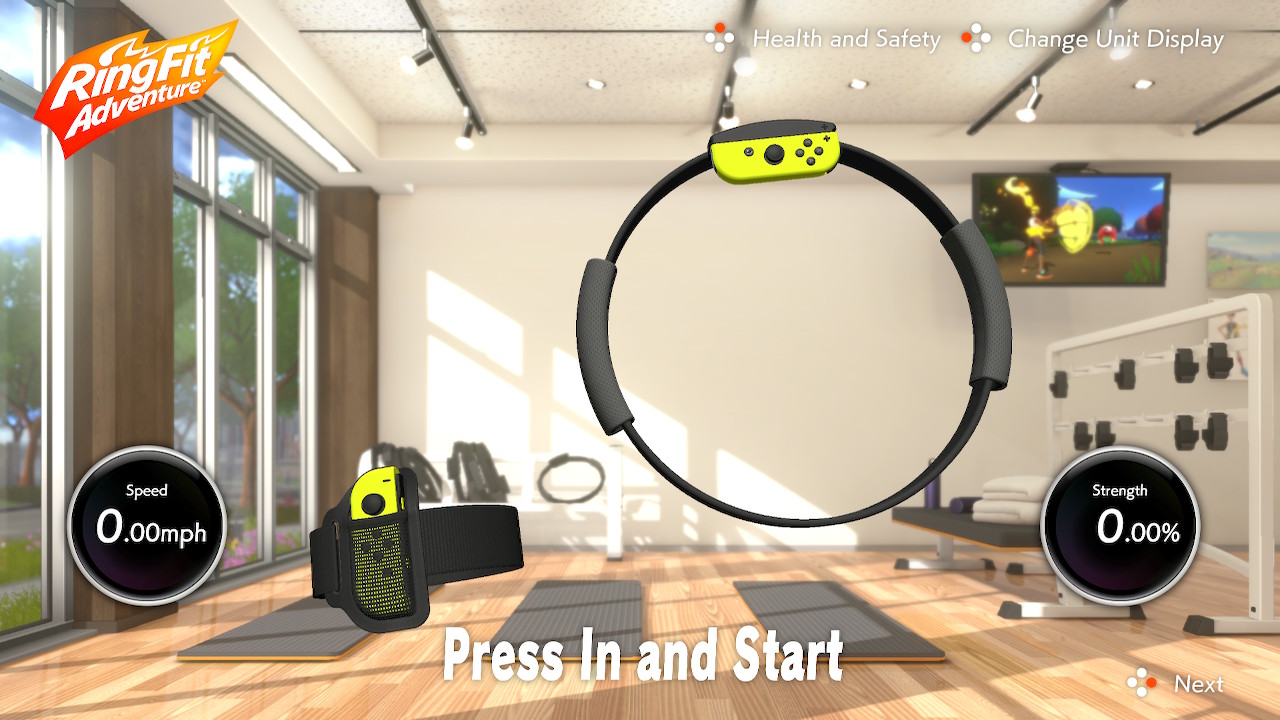 Playing with these virtual versions of the controllers gives you a real feel for how solid the motion detection is.

Anyway, you do this by using the Joy-Cons in a new and strange form: the Ring-Con and leg strap. The latter is pretty self-explanatory, but the ring must be explained. It’s a thick plastic resistance ring that you squeeze from the edges or pull apart. It detects how hard you’re squeezing it through the other Joy-Con, which slots into the top. (The strap and ring grips are washable, by the way.)

The two controllers combined can detect all kinds of movements, from squats and leg lifts to rotations, presses, balancing, and yoga poses. You’ll need them all if you’re going to progress in the game.

Each level is a path that you travel down by actually jogging in real life (or high stepping if you’re in goo), while using the Ring-Con to interact with the environment. Aim and squeeze to send out a puff of air that opens a door or propels you over an obstacle, or pull it apart to suck in distant coins. Press it against your abs to crush rocks, do squats to open chests — you get the idea. 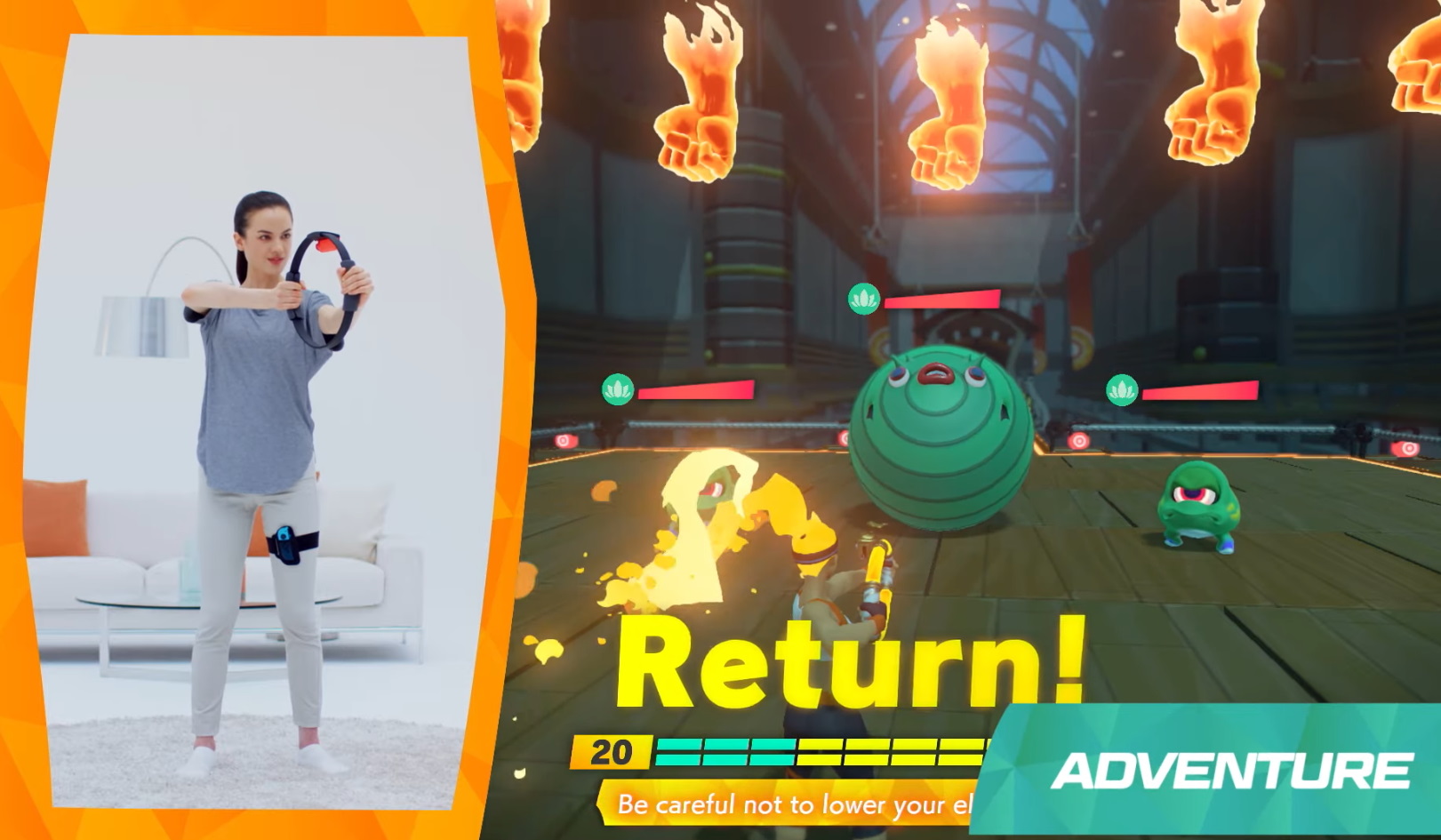 I haven’t gotten this one yet, but it looks handy. I could use a stronger arm-based multi-monster attack.

Of course you encounter enemies as well, which you dispatch with a variety of exercises targeting different muscle groups. Do a few arm presses over your head for some basic damage, or hit multiple enemies with some hip rotations. Each exercise has you do a number of reps, which turn into damage, before defending against enemy attacks with an “Ab Guard.”

The ring and leg strap seem almost magical in their ability to track your motion in all kinds of ways, though some are no doubt only inferred or fudged (as when you lift the leg without the strap). A missed motion happened so rarely over thousands of them that I ceased to think at all about it, which is about the highest compliment you can give a control method like this. Yet it’s also forgiving enough that you won’t feel the need to get everything right down the millimeter. You can even check your pulse by putting your thumb on the IR sensor of the right Joy-Con. Who knew?

As you progress, you unlock new exercises with different uses or colors — and you soon are able to fight more strategically by matching muscle group coloring (red is arms, purple legs, etc) with enemies of the same type. It’s hardly Fire Emblem, but it’s also a lot more than anyone has every really expected from a fitness game. 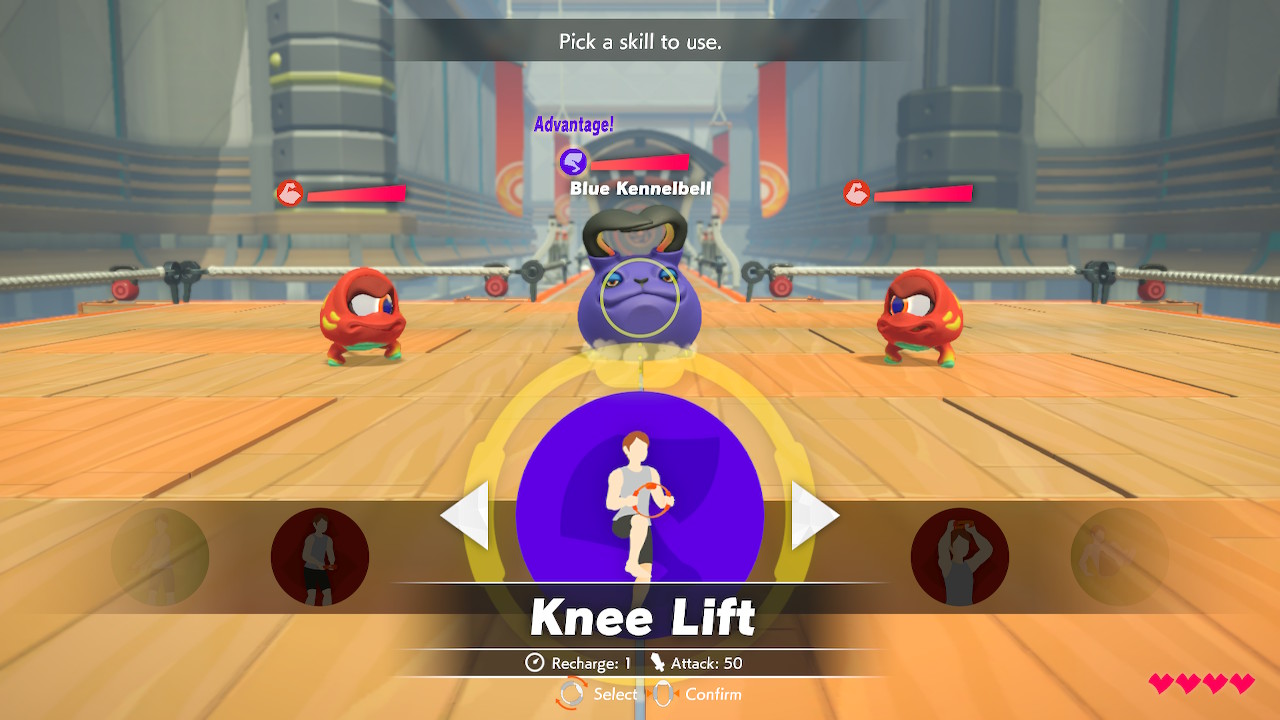 The red guys are like, “yeah… do him first.”

In fact, so much care and polish has clearly gone into this whole operation that’s it’s frequently surprising; there are so many things that could have been phoned in an not a single one is. The exercises are thoughtfully selected and explained in a friendly manner; the monsters and environments show great attention to detail. There’s no punishment for failure except restarting a level — the first time I “died,” I expected a little sass from my chatty companion, Ring, but it just popped me back to the map with nary a word.

Throughout is a feeling of acceptance and opportunity rather than pressure to perform. You can quit at any time and it doesn’t chide you for abandoning your quest or not burning enough calories. If you decide not to do the warm-up stretch, Tabb just says “OK!” and moves on. When you perform a move, it’s either “good” or “great,” or it reminds you of the form and you can try again. Whenever you start, you can change the difficulty, which I believe is reps, damage, and other soft counts, since it can’t increase the resistance of the Ring-Con.

There’s no pressure to change your body and no gendered expectations; Your exercise demonstration model/avatar, Tabb, is conspicuously androgynous. Your character is a pretty cut specimen of your preferred gender, to be sure. And Dragaux himself is a sort of parody of oblivious, musclebound gym bunnies (“He’s working out while planning his next workout,” the game announced one time as he skipped an attack to do some bicep curls). But even he, Ring mentions at one point, used to be very insecure about his body. Importantly, there’s nothing about the game that feels targeted to getting a certain type of person a certain type of fit.

I’m not a trainer or fitness expert, but so far the variety of exercises also feels solid. It’s all very low-impact stuff, and because it’s resistance ring and body weight only, there’s a sort of core-strengthening yoga style to it all. This isn’t about getting ripped, but you’ll be surprised how sore you are after taking down a few enemies with a proper-form chair pose.

If you don’t want to play the adventure mode, there are minigames to collect and short workouts you can customize. Honestly some of these would make better party games than half the stuff on 1-2-Switch.

As I’ve been playing the game and discussing it with friends, I found myself wanting more out of the game side. I’m hoping Ring Fit Adventure will be a success so that Nintendo will green light a new, deeper version with more complex RPG elements. Sure, you can change your outfit here for a little extra defense or whatnot, but I want to take this concept further — I know the fundamentals are sound, so I’d like to see them built on.

It feels like until now there have been few ways to really gamify fitness, except the most elementary, like step tracking. The two separate motion controllers and the smart ways they’re used to track a variety of exercises really feel like an opportunity to do something bigger. Plus once people have bought the accessories, they’re much more likely to buy matching software.

My main criticisms would be that it’s a bit limiting at the beginning. There’s no choice to, for example, prioritize or deprioritize a certain type of exercise. I could probably stand to jog more and do arm stuff less, and I dreaded having to resort to squats for the first few worlds. And the constant instruction on how and when to do everything can be wearing — it would be nice to be able to set some things to “expert mode” and skip the tutorials.

The game and accessories will set you back $80. If you consider it simply as buying a game, it’s an expensive gimmick. But I don’t think that’s the way to think about it. The target audience here is people who likely don’t have a gym membership, something that can cost $50-$100 a month. As a fun and effective fitness tool that does what it sets out to do and does so in a praiseworthy way, I think $80 is a very reasonable asking price.